As Nigerians approach election year, Scholars at the memorable and impactful Eid-ul-Adha get-together recently organised for orphans and children with special needs by Lotus Bank in partnership with AIMS Media Company Limited held at Bab-es-Salam Homes have called on Muslims to actively participate in politics with the purpose of choosing the right leaders into different elected offices.

The chairman, Board of Directors, Aims Media Company Limited, Dr. Ahmed Tunde Popoola enjoined electorates to choose competent and God-fearing leaders who have visions for the country, adding that religion or ethnicity should not be deciding factors.

“I will want us to look out for the leader that can take us to the promise land, the land of prosperity, security, peace and the land where employment will be for everyone, the land where people will be able to go about their duties without fear or favour. A land full of milk and honey. Therefore, we should not apply sentiment, emotions, tribalism in all our decisions when it comes to making our choices, the choice we should make should be the choice of those who will represent us well.”

Speaking on apathy towards politics among Nigerians, he urged every adults to be fully involved in politics and have active participation.

“There are two levels of active participation. First, you can contest election into any elective post and if you don’t even want to do that, then you should come out to vote. If you don’t come out to vote, then you contribute to what we call unpopular government because it’s only those who vote that will be counted.

“So, you cannot sit at home and be doing analysis on television and expect to produce good leadership. If you want good leaders, then you will have to go and register first, collect your voter’s card and then you are empowered.

“I urge all Nigerians, especially those that have never voted before, who always think we don’t want to be part of it or that our votes will not count. We have seen a lot of improvement in our electoral process and we’ve seen the commitment that INEC has brought to the table, even the federal government led by President Buhari has given a lot of commitment to allow them to have free hands so that people who win will be the ones declared.

“It’s left to us as citizens to go out, collect our voter’s cards and on the day of every election, even if it is local government election, we should all go out and vote for the candidates of our choices based on great ideas, leadership principles and practices they have displayed based on their experience, knowledge about them, not about any other sentiments. 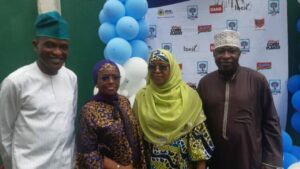 Similarly, Imam Hassan Idris Tahir, the Head of Bab-es-Salam Home, while speaking on the coming 2023 election, advised everyone to relate with people, irrespective of religion, creed, race or ethnic background, with genuine love.

As the Prophet (S.A.W) says in one Hadith that; “Save yourself from hell even if it is half of a date”, so within your capacity, assist others because one thing we must understand is that Allah relates with us according to how we relate with others. If you want Allah to be merciful to you, be merciful to others. The Prophet (S.A.W) also said that “The one who doesn’t show mercy, won’t see mercy.”

“Allah helps his servant as long as his servant is helping others. Virtually, your relationship with others has a connection with how Allah also treats you.” Imam Tahir concluded.

In attendance at the event along side the Managing Director of Lotus Bank, Hajia Kafilat Araoye were founder, City of Knowledge Academy, Mrs. Mosun Belo-Olusoga; MD, Media Reach, Mr Yinka Adebayo and other dignitaries were all around to share their time and wealth of experience with the children.

The event featured impactful lectures from many dignitaries in attendance, nasheed presentation, choreography, treasure hunt, quiz competition, outdoor games with various gift items for all the children in attendance.

Schools and associations were not left out as they joined the children at Bab-es-Salam Homes for the event, schools such as Pacelli School for The Blind, Deaf Women Association of Nigeria, Baytu Sakinah Home, Halal Children’s Home, At-Tanzeel Schools, Great Khalifah College and Al-Musineen Cradle and College.

Cross sections of children from the invited schools commended Lotus Bank and other sponsors for giving them a sense of belonging and showing them love.

Speaking at the event, the Divisional Head, Corporate Services, Lotus Bank, Mr. Funsho Tooki, expressed happiness that the Bank has been able to put smiles on the faces of orphans and people with special needs.

According to him, At Lotus Bank, we believe in inclusiveness. We believe in equal opportunities for all. We are always looking for the underbanked and ways of ensuring financial inclusion of the underprivileged people. They might not be able to do this on their own or celebrate the ‘Eid in a grand way. With this, their talents can be discovered and the orphans will see us as their parents.

Also speaking at the event, Hajia Aminah Muhammad, MD/CEO of AIMS Media Company Limited said that the concept is Eid-ul-Adha get-together for orphans and children with special needs is targeted at reaching out to the needy which invariably helps reduce crimes.

“Alhamdulillah we are fulfilled and the children are also happy. We appeal to corporate organisations and even individuals that are even more buoyant than corporate organisations to reach out to the needy in our society. It’s just for us to be a little bit selfless, not to think of ourselves alone. We should think of those who will also need our assistance.

From CAN to cant – By Sam Omatseye