Muslim Media Watch Group of Nigeria (MMWG) has called on all Muslims to partake in the ongoing voter registration exercise in the country.

Lasilkiin.com reports that the group advised Muslims to register as the opportunity to do so will end by coming Sunday 31st July 2022.

This was contained in a statement issued and signed on Friday by the National Coordinator and National Secretary of the Group, Ibrahim Abdullahi and Dr. Nasir Balogun.

The Group stressed the importance of the exercise as including the opportunity for voters to change their Polling Units to new Polling Zones they are domiciled.

The Group reiterated that those who failed to register between now and Sunday might not be opportune to vote in the next general elections.

The group further charged registered voters to keep their PVC, stressing that whoever is unable to produce his voter’s card would not be allowed to vote. 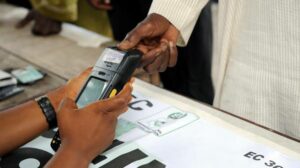 The Muslim Media Watch Group of Nigeria (MMWG) also congratulated the Muslims all over the world on the occasion of the end of Islamic Calendar Year 1443 AH which comes up tomorrow (Friday 30th Dhul-Hijja, 1443 AH).

The Group, therefore, charged all Muslims to enter the New Islamic Calendar Year 1444 AH with piety, obedience to Allah’s commandment, and good deeds.

The Islamic Body maintained that without Almighty Allah’s benevolence, many would not have witnessed the New Year, adding that the best way to show appreciation to the Creator and Sustainer is to resolve to do all that Allah has commanded true believers to do and avoid all sins no matter how little.

The Group emphasised the need for fervent prayers especially now that the Country is witnessing unprecedented insecurity, economic difficulty, unemployment, and unbridled corruption among others so that the nation could witness a positive turn-around soonest for the betterment of the Nigerian Society at large.

All Muslims old and young, males and females were also urged to troop out in large numbers to celebrate Hijrah 1444AH in their respective States.

The celebration according to the Group will come up in Ilorin at the Kwara State Stadium Complex Ilorin on Saturday, from nine o’clock while other States have fixed their celebrations for next Saturday and Sunday.

Hijra marks a turning point in the history of Islam to commemorate the movement of the Holy Prophet Muhammad from Makkah to Madinah – One Thousand Four Hundred and Forty-Four Years ago – which signifies the spread of Islam to the entire globe.

Muslim-Muslim Ticket: Our PVC And Prayers Are Our Weapons – Babachir Lawal

Muslim-Muslim Ticket: Our PVC And Prayers Are Our Weapons – Babachir Lawal

Muslim Professionals Urged On Self Development

Presidential Primaries: SDP Disqualifies Femi Okunnu’s Daughter For Being Inexperienced; Says She Should Contest For LG Chairman, Others.