Amotekun Intercepts 140 Travellers In Ibadan, Escorts Them To Ogun Border

About 140 travellers from Zamfara en route Ogere, Ogun State loaded in a truck were intercepted at Bodija area of Ibadan by men of the Oyo State Amotekun corps, on Tuesday.

Some residents around the Bodija market area had notified Amotekun of their suspicion on sighting the truck loaded with bags of onions, beans, potatoes, and motorcycles with Northern travellers comprising men, women, youths and children stuffed in between.

The truck was subsequently moved to the office of Amotekun at Dandaru, Ibadan, where the travellers were interrogated while items in the truck were offloaded and the truck searched.

Upon interrogation at the Amotekun office, the driver of the truck, Abuja BWR 143 XD, Abdullahi Aliu, said he was conveying the items and travellers to Ogere, Ogun State, and only offloaded some items at Bodija market. 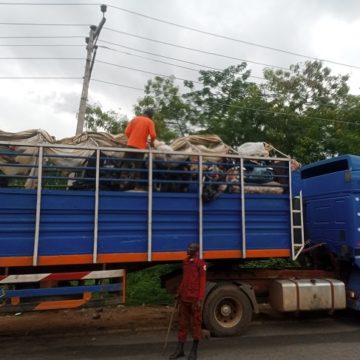 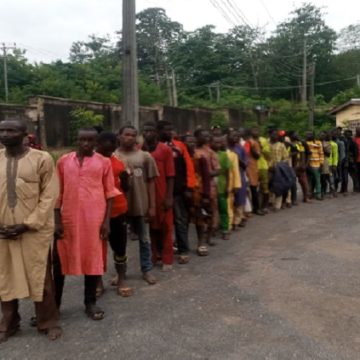 Asked why he was conveying such a huge number, Aliu said he assisted some of them on the journey because they did not have transport fares.

Men of the Department of State Services (DSS) and the police were on hand to search and interrogate the travellers.

After search and interrogation, security agencies said no incriminating item was found on the travellers and in the truck.

The security agencies, subsequently, resolved to escort the travellers, to the Ogun state border for them to continue their journey to Ogere, after their destination had been confirmed.

Special Assistant to Governor Seyi Makinde on Arewa, Ahmed Muritala, who was present at the Amotekun office, condemned the truck driver for conveying such a huge number at a time the nation faced security challenges.

Muritala said he had called the owner of the vehicle to be wary of conveying such a huge number of people from the North at such a time.

He added that he was in support of the travellers being escorted out of the state.

WHY I NO LONGER LOVE MY HUSBAND, DIVORCE-SEEKING WOMAN TELLS COURT

Unfortunate Incident: Two Men fight dirty on the expressway,Knock down by a moving vehicle

How dangerous is calcium carbide to fruit farmers, vendors and consumers?

Reasons Behind My Action For My Journalist Wife – Angry Husband