Osun State government under the administration of Governor Adegboyega Oyetola has been recognised and honoured with awards of excellence as the best performing Governor on Efficiency of Public Expenditure by the World Bank and the Federal Ministry of Finance.

According to States’ Fiscal Transparency, Accountability, and Sustainability, SFTAS, this development came after beating 35 other governors to clinch the coveted award.

The awards were bestowed on the governor and the State in Abuja, at an event tagged, “Federal Government of Nigeria/World Bank States Fiscal Transparency, Accountability and Sustainability (SFTAS) recognition dinner with Governors/Awards Night.”

According to the global bank, the Osun State Governor clinched the award following reforms which he deployed and which have impacted positively on the fiscal transparency and accountability in public resource management of the State.

Receiving the awards on behalf of the Governor and the State, the Osun Finance Commissioner, Bola Oyebamiji, said Oyetola has been able to manage the debt situation of Osun in such a way that it has not affected the State’s present and future development. 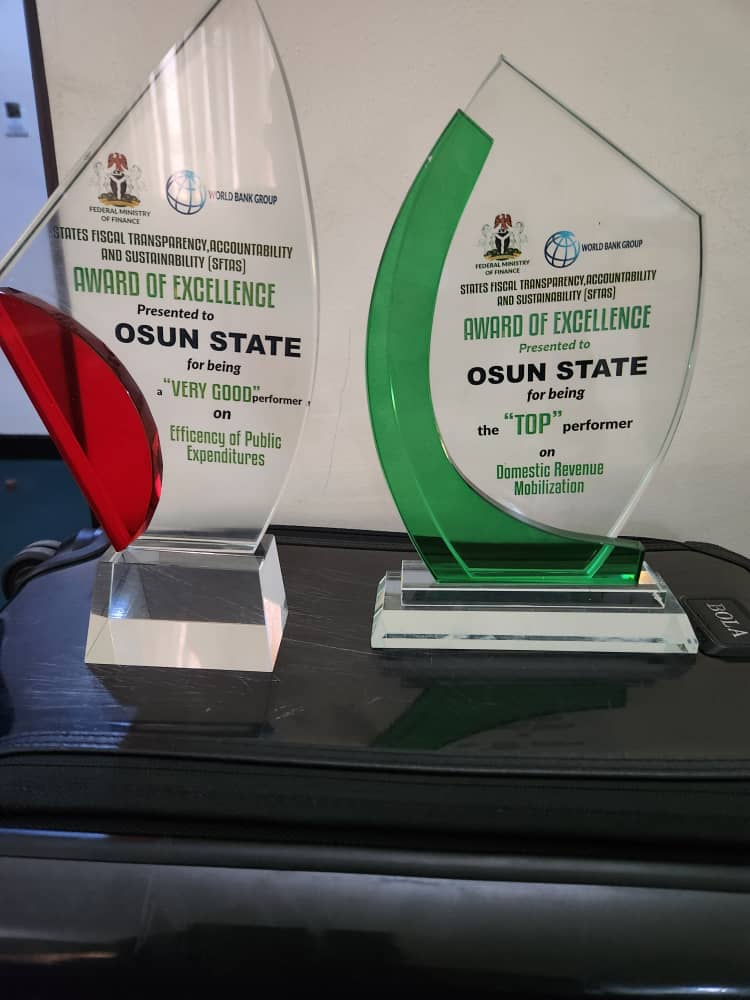 He further spoke more on the efforts the government of Osun State have been taking and putting in place in the state which brought about this recognition and awards.

In his words, “For me, the awards go further to show that all the accolades being showered on our boss, who prefers to call himself the team leader, is no fluke.

“Before we came in, the Internally Generated Revenue (IGR) of the State was N10.3 billion in 2018. But by 2020, Osun’s IGR grew to N19.67 billion, placing it among the top 16 states with the highest IGRs in the country. The state raised N9.6 billion in the first six months of the year and N9.8 billion in the last six months.

“In 2018 (before we came into office), Osun was placed 32nd on the fiscal sustainability index, finishing just ahead of Taraba, Plateau, Adamawa, and Kogi states.

“But by 2021, the state climbed to 19th place on the index. It was ranked 13th out of 36 states of the federation. You will agree with me that this is a significant improvement under the Oyetola administration,” Oyebamiji added.

NASFAT drives her vision through the different organs – Niyi Yusuf

Have you heard? Did you know that…?, That what?

Healthy FIFA World Cup Qatar 2022; Creating a Legacy of Sport for All

We Have A Leader In Niger Republic That Supplies Us AK-47 Riffle, Ammuntions – Bandit Kingpins