Incessant closure of public universities due to strike actions by staff unions, rising insecurity, option of job opportunities outside Nigeria, perceived preference for foreign degrees by employers of labour in Nigeria, opportunity of permanent residency post-study and absence of opportunity for Nigerian universities’ degrees through higher education transnational education are some of the reasons that have been identified as indicators to the fact that all is not well with Nigerian universities which is why high number of candidates are seeking opportunities to undertake their undergraduate degree programmes outside Nigeria.

The convocation lecture titled, “The Nigerian University System: Between Public Hopes And Individual Expectations For The 21st Century” chronicles different aspects and factors of the concept of university system, historical background and what’s obtainable around the world.

There are two versions surrounding the evolution and establishment of universities. Some historical sources have that, at the early stages the institutions were operating like guilds bound by an objective of protecting the common interests of their members. This subsequently transformed into centres of knowledge where those who are knowledgeable were invited and paid to give lectures.

The foundation of university system as it is known today evolved from some form of collegiate system to allow for a more effective management of the organization. The universality nature of university simply means, universality of the provided knowledge, the development of free thinking and citizenship, freedom of research, objectivity, truth, freedom to teach and to learn, the generation of cultural worldview and cultural heritage of academic values, the perfection of the spiritual and moral perspective of a person, and his socialization. 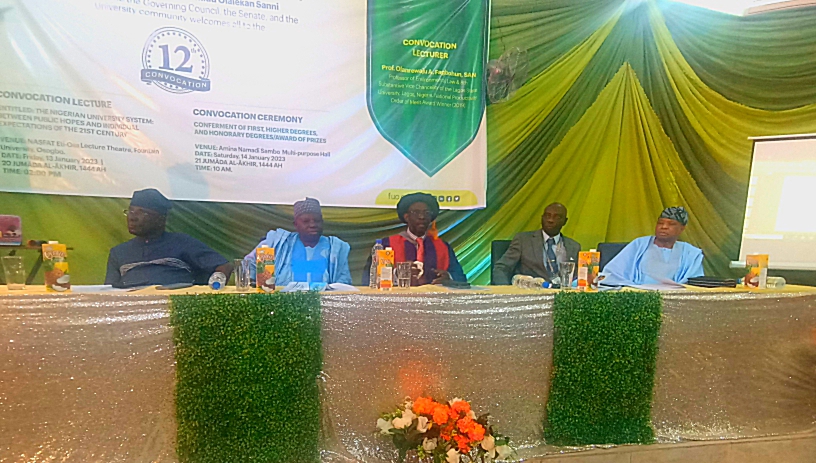 “Universities are centres of diversity of knowledge. They thrive on shared creation of knowledge across disciplines and ability to meld the multiple discourses that shape decisions that can have impact at the local, state, federal, regional and global levels.”

According to Prokopenko and Selevich in an article in which they cited A. Schopenhauer titled, “Research and Development of Modern Universities’ Essence”, it explains that the essence of the organization called ‘university’ is the desire to know reality and to update the ideas of mankind to meet this reality.

Prof. Fagbohun shed light on the situation in Nigeria.” Since 1962 when Nigeria started the regulation of universities, the country today has about 220 universities that cut across federal, state, and privately-owned institutions. The fundamental question to ask is how many of our universities are delivering in their vision and mission statements? To give a honest answer requires looking beyond the mere routine fulfillment of the teaching, research and community engagement mandate. It also goes beyond annual ritual of admitting students at matriculation ceremonies and regularly graduating students at convocation ceremonies”.

“Considering the statistics with respect to universities around us, can it be said that Nigerian universities are meeting expectations? Expectation in this regard is with reference to both public hopes and individual expectations. It starts from what stakeholders with the university look forward to, and ultimately rests on the quality of and performance of the university”. 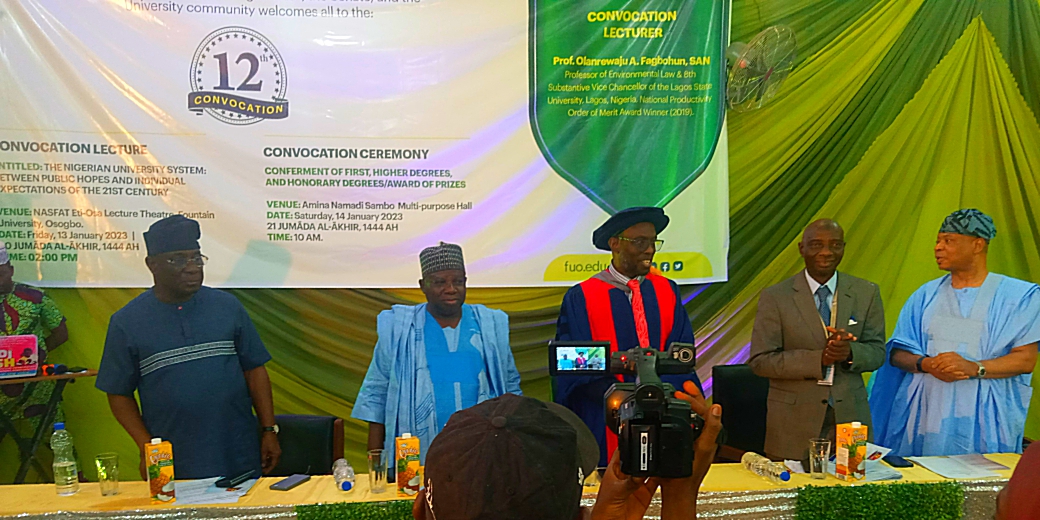 On a regular basis, the public is inundated with growing concerns over the quality of graduates from Nigerian universities and the need for universities to re-examine the method of learning, teaching and assessment. Everyday, there are job advertisements, yet, the unemployment rate has been on the rise.

According to a World Bank report, unemployment rate in Nigeria rose five-fold in the last 10 years. From 6.4 percent in 2010 to 33.3 percent at the end of 2022. While employers of labour attribute the rise to the fact that Nigerian graduates ate unemployable, while affected graduates allude to the fact that employers are not ready to pay sustainable remuneration that is commensurate with their skills. They are also of the opinion that employers are not transparent, and are playing politics of social preference with the limited opportunities available.

“Evidence that all is not well in Nigeria’s employment sector is reflected in the recent wave of young Nigerians and other professionals such as doctors, nurses, engineers, IT experts and university lecturers relocating out of the country”.

So, ultimately to surmount all the challenges facing the Nigerian university system, among others is to peep at the features and potential realities of university of the future with certainly help.

Likely features that will become revalent are:
Students-centred learning where students are able to learn from everywhere in real time;

Collaboration and co-location of university and industry on projects to solve real-world problems;

Lectures with be de-emphasized while focus will be on rela learning as informed by science of learning i.e. spaced learning, emotional learning and the application knowledge. 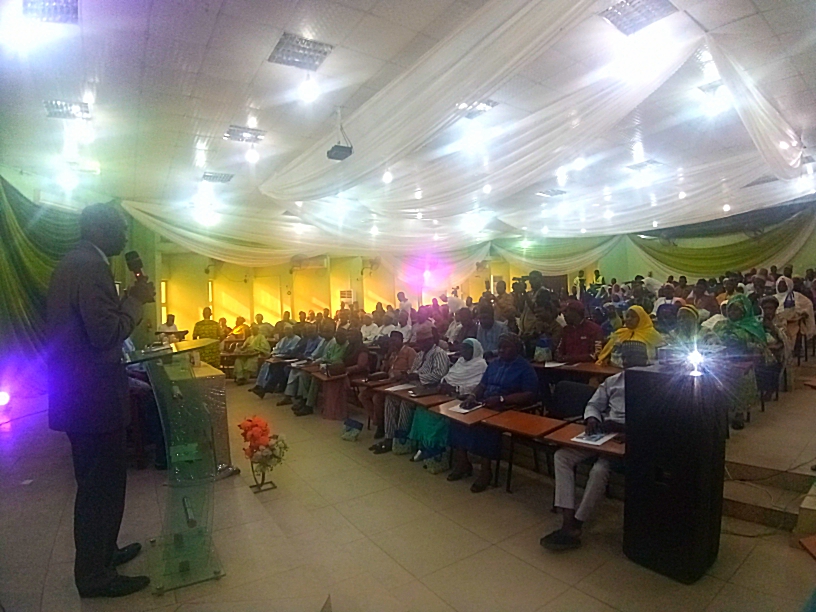 Arising from the above features of the university of the future, the following will become our realities:

Consumer choice and competition in higher education sector will drive down prices;

Near universal access to digital devices will encourage students to treat universities the same way as they are treating shopping, banking, music and movies;

The knowledge economy model with emphasis on outcomes with result in decline of industrial era model of higher education based on process; 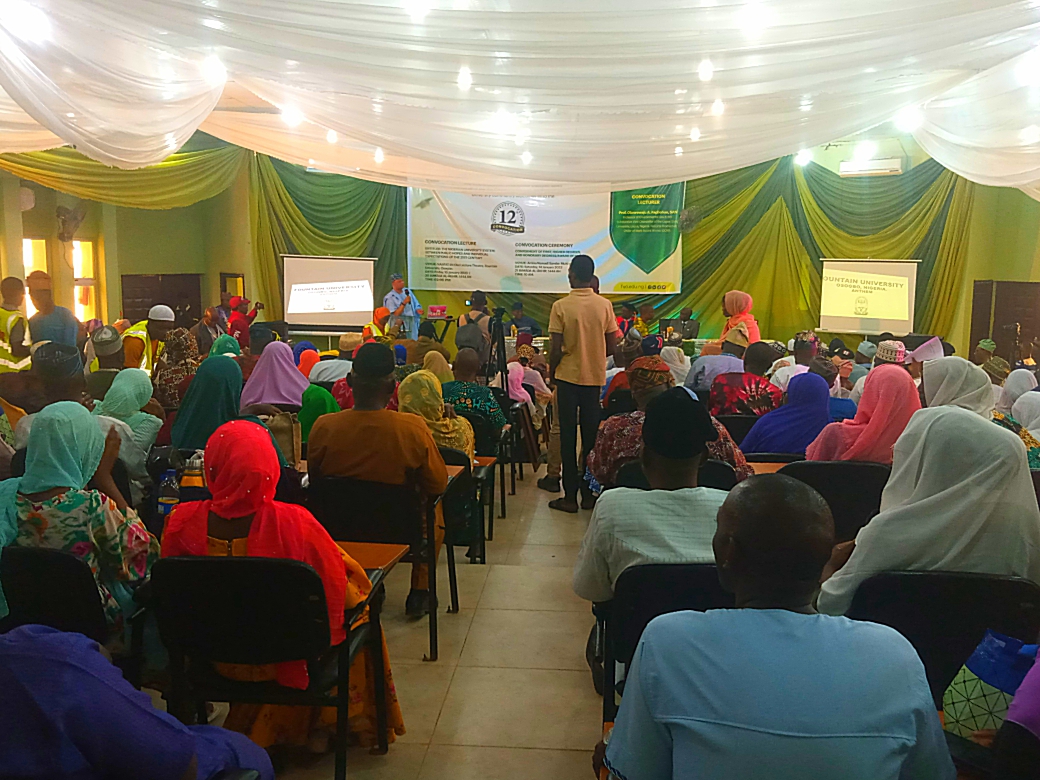 Prof. Fagohun commended Nasrul-Lahi-L-Fatih society, NASFAT and the memories of the founding fathers of Fountain University Osogbo for the pioneering efforts of the initiative and the astute determination of various functionaries that have been involved in the administration, management and leadership in mobilizing resources for the steady growth of the Vision and Mission of the institution which began academic activities on January 14, 2008.

“The Vision to be a pace-setting institution in terms of learning, character-building and service to humanity and the Mission to produce competent and resourceful graduates with high moral standards irrespective of race, tribe, religion or political inclination have not been neglected since the grant of its operational licence in 2007 and the transformation the university has recorded in the last 15 years.”

“The intention behind this Vision and Mission has they have been exhibited in the kind of graduates who pass through the institution is not just to give students the education and experiences that set them up for success in a career but the university also desires to help them discover a field they are passionate about, dare to lead it and ultimately succeed in their career as this is evidence in the way the university is fast rising.”

In his message to the convocating students, he said, they must recognize that they have become a critical part of that group that will address the nation’s development challenges. The challenges of today should inspire in them greater determination to want to make their marks.

“I will by no means play down the fact that we have serious issues confronting our great nation. I will however, hasten to add that what you are witnessing is a phase of development from which our dear country will surely emerge.”

“Nigeria may be tough and the narrative of the issues at times deeply troubling; but I can tell you, opportunities are still very many here, and can be discerned by only those whose eyes are trained to see challenges as opportunities in disguise, and use the law of polarity to unleash their creative side of strategically positioning themselves for success.”

“So your education can serve as an instrument that will facilitate your integration into the present system in one of these two ways. It can be with an intent to ‘join them if you cannot beat them’. It can also be the means by which you become a part of the transformation process. So, the choice is yours but then it is a choice of either be a ‘bread and butter man/woman’ or a ‘man/woman of legacy’.”

The road for Nigerian universities to meeting the expectations of the 21st century is for the National Universities Commission (NUC) as the regulatory body saddle with the monitoring and regularising the affairs of universities in Nigeria is to torch light on university ranking, review of Curriculum, Accreditation, Tertiary Education Trust Fund(TETFund), Private Universities and the Challenge of Governance, JAMB and the sore point of incessant crisis by university-based unions.

He concluded by reiterating that, to achieve the much-needed stability necessary for nurturing sustainable development and that not only keeps the hopes of the public alive but also guarantees the fulfilment of individual expectations, none of the role actors can afford to remain insular in their standpoint.

Earlier in his speech, the Vice Chancellor of Fountain Sets Osogbo, Prof. Amidu Olalekan Sanni gave background to the journey of Fountain University Osogbo convocation lecture’s topic. “Our first convocation lecture which was help about 12 years ago witnessed the presence of Prof. Toye Falola from university of Texas in the United States, also prof. James Olupona was invited Harvard university while last year a Nigerian based lecture was invited, who was Prof. Danbattau of the FCT but this is first time inviting a former VIce Chancellor, from the second best university today in Nigeria, Prof. AbdulHakeem Olanrewaju Fagbohun.

Also during the special jummah prayer in commemorating the ceremony he urged the students not to speak negativity onto to themselves. They should always be optimistic in whatever challenges of life  throws at them while shouldn’t neglect the constant remembrance and worshipping of Allah SWT and they shouldn’t relent in making hallmark impacts wherever they find themselves.

Lasilkiin.com correspondent at the convocation lecture, Fausiat Salako-Sanni reports that high point of the event was the appreciation and presentation of awards of recognition to dignitaries for their supports to Fountain University Osogbo while prayers was offered for peace, tranquility in country and unity of Nigerians.

NASFAT WOMEN’S WEEK: SKILLS ACQUISITION GRADUATION: “The Youth Grow In The True Image Of Their Parents And The Environment Of Their Upbringing”…Alh. Engr. Kayode Sote, FNSE, FAEng